Karate: Age Is Not A Factor In Choosing This Activity 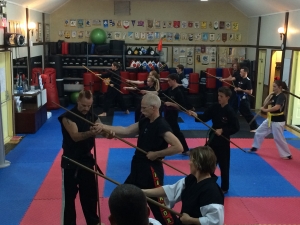 Hugh has a Karate Black Belt with Arashi-Do Martial Arts out of Springbank, Calgary. He cross trains in Muay Thai and Brazilian Jiu Jitsu. He started Karate with his 3 sons and though they have since taken on other pursuits, Hugh stayed with it. After 4 years he earned his Black Belt. He sometimes helps teach at the Springbank dojo, and attends most of the seminars and tournaments (as time allows). He admits that he was in generally good shape when he started Karate, or he thought he was, but believes his current good health can be attributed in part to continuing to train, to develop as a martial artist, and to the community of martial artsists who encourage and build up their team mates. Hugh is 60; he started when he was 52.