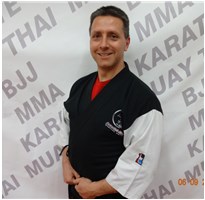 Wayne Pineau is the owner and operator of Arashi Do Martial Arts, Bowden/Penhold, since 2011. He has been training in the martial arts on and off since 1984, including Karate, Judo, Brazilian Jiu Jitsu, Tae Kwon Do and Aikido. Wayne received his black belt in Karate in 2009 from Arashi Do Martial Arts. Currently the principal of Innisfail Junior/Senior High School, Wayne has been teaching since 1992 and in administration since 1997. He has been the principal of 4 different schools (Rosalind, River Glen, Bowden Grandview and IHS). Sensei Pineau has a Bachelor’s Degree in Education (1991), and Master’s Degree in Educational Leadership (2002), both from the University of Lethbridge. Wayne is married to Bobbi, and has four children, all of whom have trained in Karate: Millisa (Green belt), Aleah (Green belt), Kayla (Brown belt), and Donovan (Blue belt).