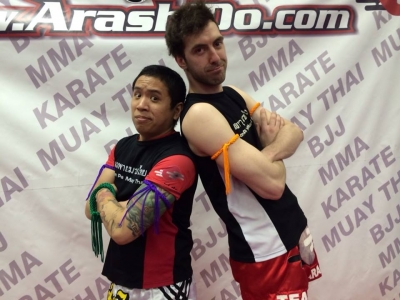 Very special day as after 6+ years of training Peko Sananikhom and Sean Enright were awarded their degree Nak Muay Level (fighters),black/brown Prajied. Also, a couple years after achieving the same, Derek Jolivette and Chris McMillan moved to Khru Phu Chwy (First Trainer/Teacher).
Amazing dedication, club loyalty, skill and a shared passion for their art, showed us an impressive grading throughout the day with some great demonstrations for all to see in the later part if the test. Great work guys!
Also congratulations to all others listed below for coming to grade from many of out schools around Alberta. Great energy and spirit everyone, it was a pleasure for us all to see you again and see your progression since the last time.
Thanks to the testing panel for traveling up from Calgary and Red Deer, Khru's Mike Bonde, Gary Vig, Jason Bryant and Stephanie Essensa, as well as Jessica keeping everything organized at the front counter. Also thanks to all the instructors who came to help out and take responsibility in noting what their students needed to work on, and share their success. Thanks to all others who came to support and help on or off the mat!

More in this category: « Karate Students Shine At Edmonton South
back to top

Are You An Adult Beginner or Returning Student?

25+ years of experience behind every school and instructor

Fun, sport, recreation, competition, fitness; no matter what your goal is, we can get you there.