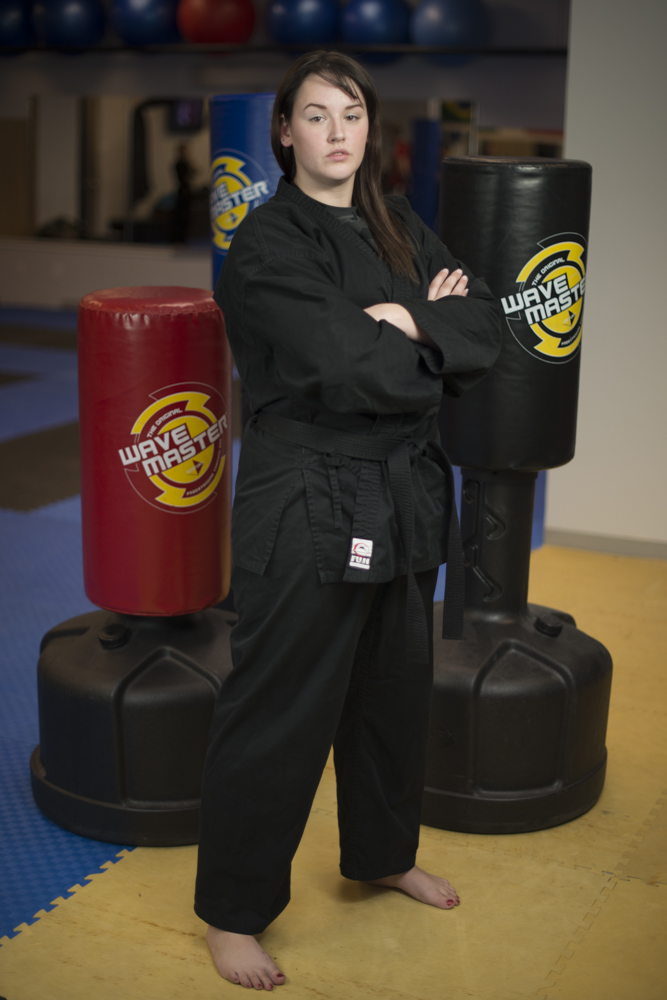 My experience with martial arts generally and Arashi Do specifically started when I was eight. At that time, my family was living near Caroline so I started training with Renshi Chris Bonde in his first karate school. I remained until I received my green belt and then had to choose between my two great loves: martial arts and all things equestrian. Horses won out at the time and I took a few years off karate, focusing on training my young horses and competing with them in many different disciplines such as local shows, hunter/jumper circuit, paint horse breed shows, 4H and I finally found my favourite equestrian sport- eventing- which I pursued up to provincial championship levels. Martial arts stuck with me and I had the opportunity to return to Arashi Do this time in Bowden with Sensei Lynn Jennyc for about six months in my final year of high school. After graduating I moved away and put my black belt dreams on the back burner. I had a couple years of adventures and then got married married and settled near Airdrie, on my husband’s family farm. We are the 3rd generation on the farm and raise beef cattle and mules. I had my daughter in fall 2008, shortly after that I happened to see an Arashi Do sign in my new hometown. I pulled in and got signed up and I have not looked back since. My daughter was 7 weeks old at the time. I was fortunate to be instructed by both Kyoshi Gary Vig and Kyoshi Mike Bonde while training in Airdrie. When I was expecting my son I had to take a break from training and after he arrived I returned, this time at the Calgary Deerfoot North school with Kyoshi Mike Bonde, Renshi Setsu Wetteskind and Renshi Jason Bryant. At this time I branched out and started training Muay Thai and was quickly hooked. I am also excited about learning more BJJ and applying it to self defense situations. Achieving my black belt was an honor and teaching is something that I feel privileged to do, I enjoy it very much. I can’t imagine a better group of people than I’ve found at Arashi Do. I had the bad luck to blow out my knee shortly after getting my black belt, have now had surgery to repair ligaments and cartilage and am slowly getting back to normal. See you on the mats!

Check out our Programs: